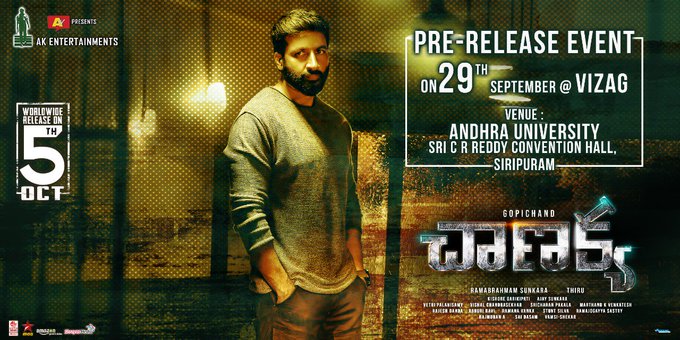 Gopichand Starrer movie ‘Chanakya’  is getting ready for a big release on 5th October 2019. The movie pre release event is going to be held in C R Reddy Convention Hall,Andhra University,Vizag on 29th September 2019.
Gopichand will be seen in a new look and it garnered a good response.

Gopichand, Mehreen , Zareen Khan are in the cast.
Music is by Vishal Chandrasekhar. Cinematography is by Vetri Palanisamy. Dialogues are penned by Abburi Ravi. Art is by Ramana. Story, Screenplay and Direction are by Thiru. Rama Brahmam Sunkara.Ajay Sunkara, Abhishek Agarwal are the producers on AK Entertainments Banner.