Konidala Sivasankara Vara Prasad was born on 22nd of August ,1955 at Mogalthur Village near Narasapur Town in West Godavari District of Andhra Pradesh.

Businessoftollywood.com wishes this popular hero of Tollywood a Very Happy Birth Day and eagerly waiting for the release  of his 151st movie ‘Sye Raa Narasimha Reddy’.

Their Kula Daivam(family god) is Anjaneya Swamy(Lord Hanuman),His mother changed his name as Chiranjeevi to succeed in films.Coming out with a Diploma in acting from the film institute chiranjeevi got an offer in the film Punadi Rallu by producer T L Kranthi Kumar and directed by Raj kumar. The film Pranam Khareedu, directed by K vasu for the producer T L Kranthi Kumar with Jayasudha in the female lead role is the first released film(22.09.1978) of Chiranjeevi. Chiranjeevi starrer first film Punadi Rallu was released on 21st of june 1979.

AVM Productions film Punnami nagu(13.06.1980) has elevated his position as actor in the telugu film Industry.

In the initial stage of his film career he performed the roles of sadist with ease.

Mega star Chiranjeevi after the tremendous success of his 150th movie ‘Khaidi No.150’ is coming up with his movie number 151 titled Sye Raa Narasimha Reddy directed by Surrender Reddy. This is the movie on the story of Uyyalawada Narasimha Reddy. The movie was launched on 16th August 2017 with formal pooja in the office of  Konidela Production Company. 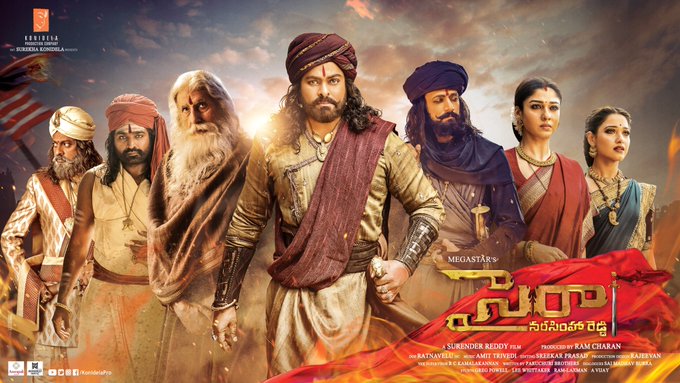 This movie is getting ready for a grand release on 2nd October 2019.

The movie teaser was released on 21st August 2018 on the eve of megastar’s birthday. The teaser projects the high production values of the movie.

The fresh teaser was released on 20th August 2019.

This is being made simultaneously in Telugu,Tamil,Hindi and Malayalam.