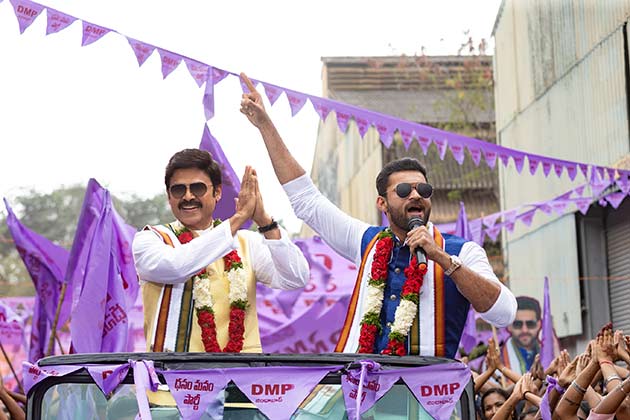 Victory Venkatesh and Mega Prince Varun Tej are set to enthrall in summer with the most awaited fun-filled entertainer F3 being directed by blockbuster maker Anil Ravipudi and produced on grand scale by Tollywood’s leading production house Sri Venkateswara Creations. While Dil Raju presents, Shirish is producing the movie. F3 is set to create laughing riot in theatres for the summer on 28th April 2022.

Rockstar Devi Sri Prasad has scored music for F3 and the film’s first single is out now. The song talks largely about the eminence and greatness of money. In fact, the story of F3 revolves around money.

DSP keeps the tune and beat peppy, though he lets the lyrics and singing take center stage. Ram Miriyala’s vocals makes this song quite effective. The song has a trendy beat and has been shot in a very stylish and extravagant manner. Bhaskarabhatla’s lyrics are best in recent times.

While the track is instantly likeable, visuals are equally appealing. Venkatesh and Varun Tej appears in multiple getups and every look is notable. Along with them, Tamannaah Bhatia also appeared in this chartbuster number. The song ends on funny note with the lead cast going crazy to pray for money to reach them to make them the rich.

While Tamannaah Bhatia and Mehreen Pirzada are the heroines opposite Venkatesh and Varun Tej respectively, Nata Kireeti Rajendra Prasad will be seen in a hilarious role. While Sonal Chauhan is roped in as the third actress to add more glamour, Sunil is zeroed in for an entertaining role. So, F3 will be combination of entertainment, glamor and other commercial ingredients.

Sai Sriram cranks the camera, while Tammiraju is the editor. Harshith Reddy is the co-producer.