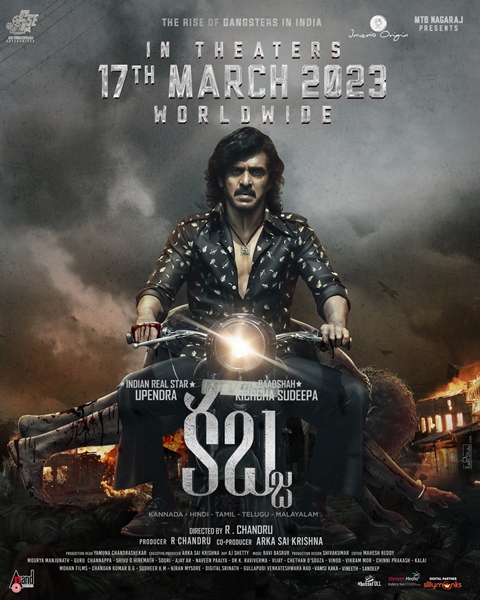 Kannada star Upendra s Kabzaa is one of the most anticipated movies in Sandalwood this year. With every promotional content the film is grabbing the eyeballs. This huge budget film is directed by R Chandru.

Kabzaa s teaser, which was released on Upendra s birthday, showed that the period film explores the rise of gangsters in India, set between 1947 to 1984. It revolves around a freedom fighter s son who gets entrapped in a mafia world.

Chandru will bring his underworld saga to theatres on March 17th, 2023. This date is a special one for all the Kannadigas as March 17 is the late Power Star Puneeth Rajkumar s birth anniversary.

As Kannada films like KGF, 777 Charlie, Vikrant Rona and recently released Kantara are making noise at the pan-India level. Another kannada film Kabzaa with the terrific response from all corners, it is sure going to be another Pan India blockbuster from KFI.

The film is presented by MTB Nagaraj and bankrolled by filmmaker R Chandru under his home banner Sri Siddheshwara Enterprises. The ensemble cast of Kabzaa is also piqued everyone s interest.