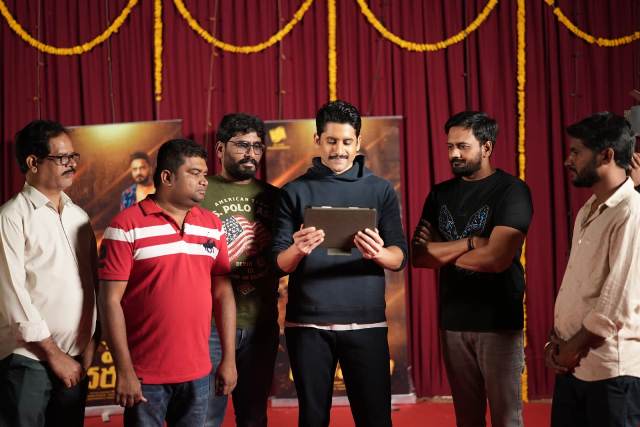 While speaking about the song hero Naga Chaitanya Garu said that this song is very interesting, at the same time looking forward for the film, I hopethe movie is definitely successful in Telugu.

Hero Sai Ram Shankar of this film said that he is very happy to release this song from hands of Naga Chaitanya sir. This is the second song from our movie, the first song Manjula Manjula song has reached five million views. The second song is the title song, which is the best dance number song from our movie. You will definitely like it. Once again, I would like to thank our producer sir, nagar Chaitanya sir.

Director Naveen Reddy said, My sincere thanks to Akkineni Naga Chaitanya who released this song, my hero Sai Garu agreed in a single sitting after telling the story of this film, I think I have conquered the trust he placed in me. I also thank the producer for giving me this opportunity with faith in me.

Producer Devaraj said, I liked story very much when Naveen told me the story. I came forward with faith in the story that no matter what the cost, the film turned out very well as we thought. We all strongly believe that it will be another good film in the hero s career. The movie will release on February 24th. Currently, post production work is going on .