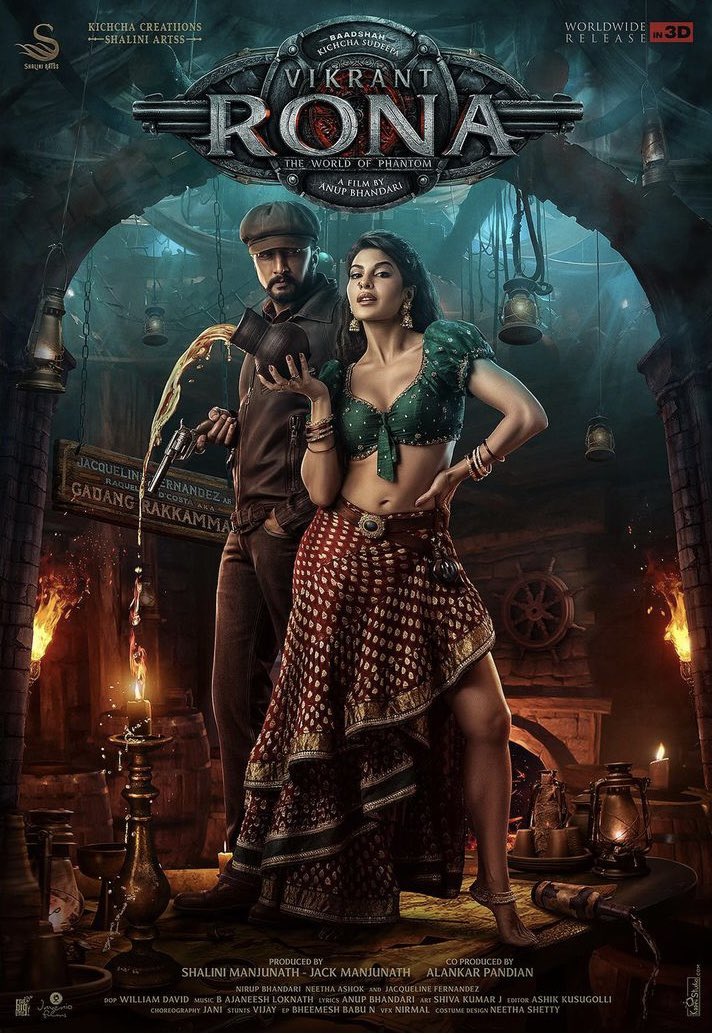 Vikrant Rona  Movie Jacqueline Fernandez Look Released
Jacqueline Fernandez Is Gadang Rakkamma in Kichcha Sudeepa starrer Vikrant Rona
In line with the grand revelations that have been announced about the upcoming Kichcha Sudeepa-starrer Vikrant Rona. After announcing that the film will be made in 3D, its makers now unveil the first look of Jacqueline Fernandez, who will be seen essaying an interesting role in it. Displayed on billboards across Mumbai, and other cities of the country. The first glimpse reveals the Bollywood star’s character Raquel D’Costa Aka Gadang Rakkamma in the pan-Indian 3D film and her look as well.
Her look in the film will have a fusion of multiple ethnicities. She plays ‘Gadang Rakkamma’ who runs a tavern in a fictional place. She will be seen matching wits with Vikrant Rona, essayed by Baadshah Kichcha Sudeep
Jacqueline inspired headlines as the word about her stepping aboard the Vikrant Rona universe spread like fire. Not only will the stunning actress be seen portraying a pivotal character, she will also be seen shaking a leg with Sudeepa in the film.
Producer Jack Manjunath says, “The story of the world’s new hero gets all the more exciting with the entry of Jacqueline. We’re happy to share a glimpse of what she brings to the movie. We’re on our way to creating an extravagant piece of cinema that will be remembered by generations to come and we’re thrilled about the growing anticipation surrounding it.”
Director Anup Bhandari says, “It feels amazing to be able to bring an element of surprise with each announcement. Jacqueline’s poster reveal was planned to convey the scale of the film yet again and how invested we are in fulfilling the promise of offering the audience a movie that will make their time in theatres worth it.”
Jacqueline says, “The team of the film has been very welcoming and every moment that’s going into its making has been exciting for me. I thank the producers for such a grand poster reveal from the bottom of my heart. This film is going to be super special and memorable for me.”
Vikrant Rona is a multilingual action adventure that will see a 3-D release in 14 languages and 55 countries. Directed by Anup Bhandari, produced by Jack Manjunath and Shalini Manjunath, co-produced by Alankar Pandian, music by B Ajaneesh Loknath, the film features sets designed by DOPs William David and Award winning art director Shivkumar. It stars Kichcha Sudeepa, Nirup Bhandari and Jacqueline Fernandez.