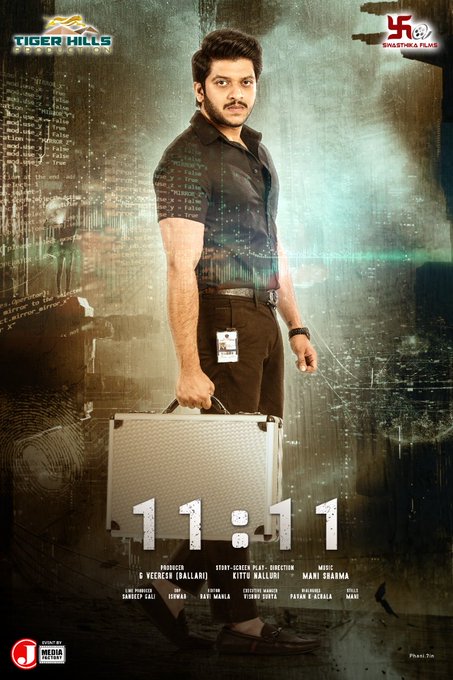 11:11 Movie First Look Launched
Megastar Chiranjeevi Launched First Look Of Tiger Hills Production ‘Production No. 1 Titled 11:11
Popular music director Koti’s son Rajeev Saluri, who has been enthralling with unique concepts since the beginning of his career, is starring in a new film under the banner of Tiger Hills Production and Swasthika Films as ‘Production No. 1’. Directed by Kittu Nalluri, the film is being produced by Gajula Veeresh (Bellary) with Varsha Vishwanath playing the heroine. Interesting aspect is Koti Saluri is playing an important role in the film. Sadan, Lavanya, Raja Ravindra, Raja Sri etc. are the other prominent cast. The movie has got mega support.
Today, none other than megastar Chiranjeevi launched title and first look of the movie in a grand event. Megastar then wished the entire team all the success. The film is titled intriguingly as 11:11 and the first look has been released on the auspicious day of 11-11 (11th November).
The first look poster is an attention-grabbing one as Rajeev Saluri who looks class in formal outfit can be seen with a suitcase in his hand. The first look poster indeed suggests that the film is being made with a novel script and it will be high on technical standards.
Currently, the shooting of this film is progressing in full swing. Music scored by melody brahma Mani Sharma will be a major asset of the film. Rajeev Saluri’s performance in the film will be one of the major highlights. Rajeev Saluri and Varsha Vishwanath’s magical chemistry will appeal to youth.
While Ishwar is handling the cinematography of the film, Pavan K Achala has penned the dialogues. Vishnu Surya Gunta is the executive producer. The release date of the film will be announced soon.
Cast: Rajiv Saluri, Varsha Vishwanath, Koti Saluri, Sadan, Lavanya, Raja Ravindra, Raja Sri etc.
Technical Crew:
Story-Screenplay-Direction: Kittu Nalluri
Producer: Gajula Veeresh (Bellary)
Banner: Tiger Hills Production, Swasthika Films
Cinematography: Ishwar
Editor: Ravi Manla
Dialogues: Pavan K Achala
Music: Mani Sharma
Executive Producer: Vishnu Surya Gunta